5 Reasons for the Speedy Adoption of Blockchain Technology 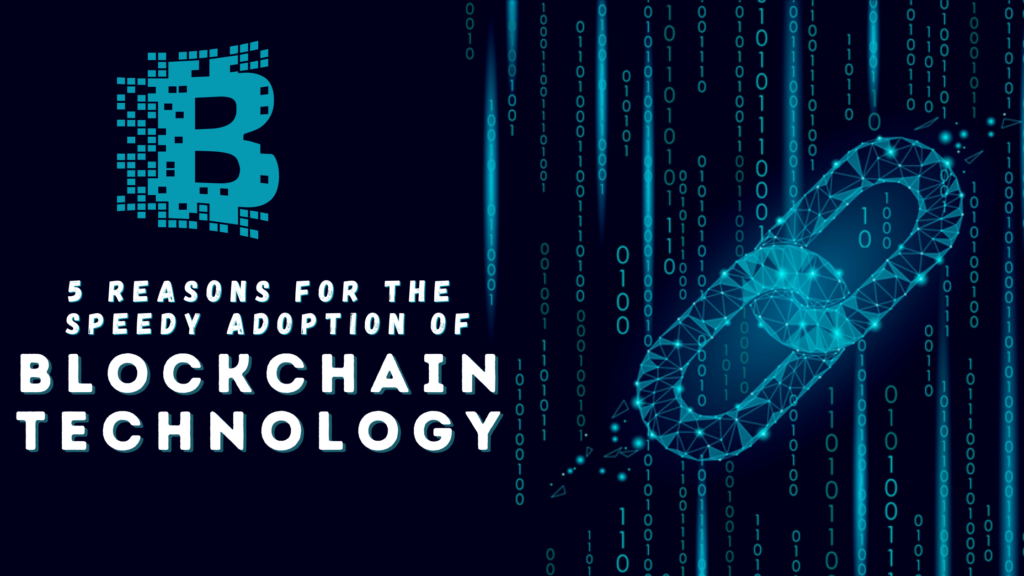 Blockchain, the digital record-keeping technology behind Bitcoin and other cryptocurrency networks, has proven itself as a potential game changer in the world of finance. While still in its nascent stage, it is being compared to the status that Internet in the 1990s held.

Just like the internet was underrated in the 1990s, it is difficult to predict the impact of blockchain in the times to come. However, experts unanimously believe in its potential and are of one mind that the technology will very soon hit its tipping point for mass adoption.

Blockchain seems to be at the threshold of widespread acceptance and adoption. Recent surveys by blockchain marketing companies show that the attitude towards blockchain technology has changed measurably in an obvious manner and the technology is being seen in a positive light for its various applications. There has been remarkable progress in terms of adoption and implementation of the technology to provide solutions to real-world problems across a variety of businesses and sectors.

Owing to this trend, several organizations have increased their investments in the technology and are demonstrating their commitment to it.
Blockchain is finding applications across a multitude of industries and several novel businesses are cropping up every day. Some of the more prominent ones include blockchain backed supply chain management, blockchain marketing agencies, blockchain products that improve coordination between teams, blockchain content writers, blockchain-backed human resource services, and many more.

Five key factors of progress have been identified that can be credited for the wider adoption of blockchain. These reasons include:

Blockchain technology can only handle three to seven transactions per second, while the legacy transaction processing system is able to process tens of thousands of them every second. This led many observers to be unsure of the potential of blockchain as a viable option for large-scale applications. However, recent developments have resulted in promising way to close this performance gap and a new consensus mechanism is being developed.
This mechanism is enabling participants (some of who are unknown to each other) to trust the validity of the transactions. While the performance may be sluggish and a lot of computational resources may be spent in the mechanism involving blockchain, the better performance is the key that is popularizing the use of the blockchain technology.
Latest designs are aiming to reduce the time and energy intensive mining required to validate every transaction. Various blockchain-based applications are able to choose between performance, functionality, and security to suit what is most appropriate for the application. This consensus model is being especially appreciated in industries like auto-leasing, insurance, healthcare, supply chain management, trading, and more.

A lack of standards has resulted in limited creative freedom to blockchain developers, blockchain content writers, as well as blockchain marketing agencies. The use of multiple coding languages, protocols, consensus mechanisms, and even privacy measures  means that the platform is unable to communicate without the help of translators, thus limiting its functionality.

Standardization methods are being introduced to enable enterprises collaborate on the application development, validate proof of concept, and even share solutions for various blockchain related problems. These measures are giving positive results in terms of ease of integration with existing systems. There has been a significant increase in the number of industry participants which is helping make cross-blockchain transactions, interconnectivity, and standardization much easier. The industry is working towards achieving the goal of interoperability by adopting existing standards and making them work in the content of new blockchain applications.

The cloud offerings have significantly improved the situation by lowering the barriers to developing and operating blockchain networks. In fact, cloud-based providers are even offering blockchain templates that are helping automate the setup of basic blockchain infrastructure. This step has reduced the time taken for application development significantly. These providers are further partnering with developers of blockchain-building tools to give access to easy development methods.

Additionally, latest software platforms are making the development and deployment of blockchain applications much simpler. Developers are also being able to create apps in their preferred language without worrying about the underlying technology. This clear trend in favour of easy-to-use blockchain tools and platforms is fostering wider and deeper penetration of blockchain technology in every industry.

The lack of regulatory bodies to solve issues as they arise was one of the major barriers that were inhibiting the widespread adoption of the blockchain technology. It was one of the factors discouraging investors from investing heavily into blockchain-backed products. The blockchain technology has introduced a series of new concepts like cryptographic signatures and smart contracts that are not covered under the existing regulations.

An official action was in order for this technology to make progress of any kind, and this year a number of bills were passed that recognized and defined in legal terms the various concepts inherent to the blockchain technology based products and services.

Removing major regulatory hurdles to blockchain adoption is still a work in progress, but the momentum is definitely building. Blockchain enthusiasts are positive about progress in this area, which is helping increase the adoption of blockchain technology.

Blockchain technology facilitates transactions across a large network and the value of this network increases with the increase in the number of users. The growth of blockchain consortia is a positive sign indicating wider adoption of the technology. The consortia comprises a group of companies that are working towards a common goal of defining use cases for the technology, developing infrastructure as well as futuristic applications, conducting research, and providing expert advice to collaborating members. The number of companies in the consortia has increased significantly in the last year itself – indicating improved adoption.

Growing participation has greatly affected the level of enthusiasm with which the technology is being seen and implemented.

The five factors listed above are greatly helping by lowering the cost of deployment of blockchain technology and expanding its practical applications. It is imperative for companies to keep an eye on the emerging mechanisms and techniques designed to increase transaction speed exponentially in order to stay abreast with the times. Blockchain developers and early adopters should intensify their efforts to improve the interoperability of the technology to ensure collective gain of the business community.

Though the technology is still nascent, firms are collaborating with lawmakers as well as policy makers to create a solid regulatory framework and fast track its adoption throughout all sectors.
An ecosystem of partners is coming up to ensure that every participant is able to derive maximum value from this technology.