An analysis of the Top20 ICOs, trends and regulatory outlook 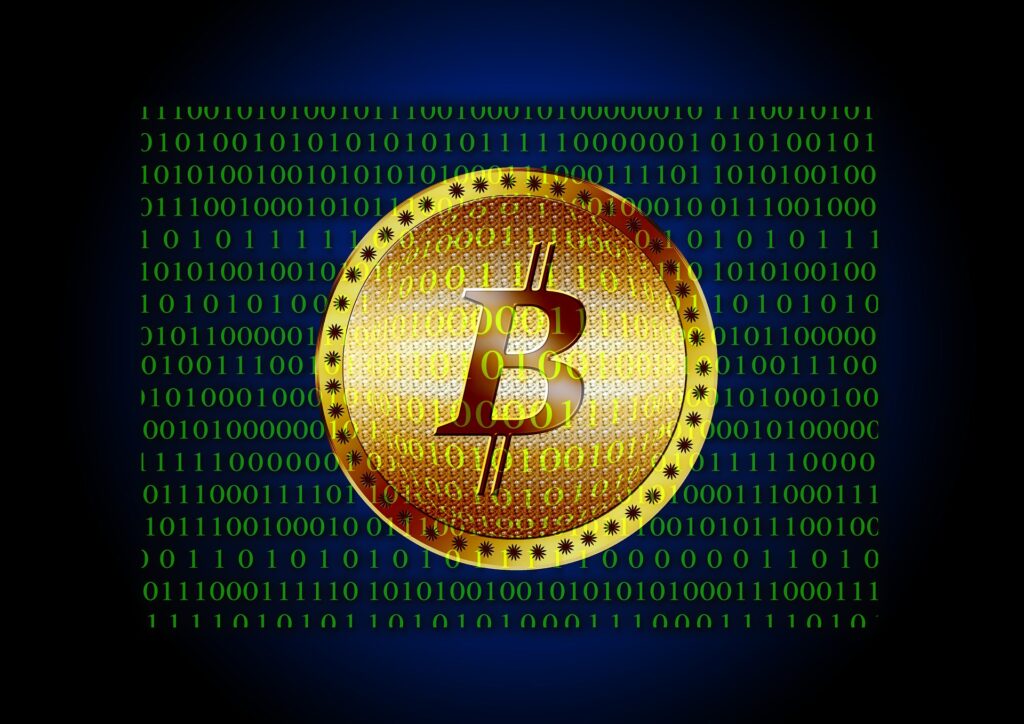 On Monday, I spoke at a conference organised by the Ministry of Defence for its defence partners on the subject of Blockchain and Defence Logistics. Before you ask what this has to do with financial services, let my presentation several others focused on the use of blockchain in finance related subjects.

For instance, Jonny Fry of Team Blockchain talked about the rise of initial coin offerings (ICOs) as an alternative method for fundraising. In his excellent presentation, he explained what you should know about ICOs and how they seem to have spread like wildfire. It is very interesting indeed since we have seen close to a 1000 ICOs as of today.

The dream of marvellous investment returns

In an interesting article by LetsTalkPayments on the same subject, the authors come to the conclusion that, when analysing the current value of a number tokens with their value at the time of the ICO, the majority of the tokens (more than 90%) have sold above ICO price on exchanges with some giving exceptional returns in the range of 2000%.

A review of the Top 20 ICO until the 1st May produces some interesting insights. For starters if we look at the list of the biggest grossing ICOs for that period it becomes apparent that – with the exception of The DAO ICO, which somewhat distorts the range – we’re safely in the bracket between $5 to $16million: 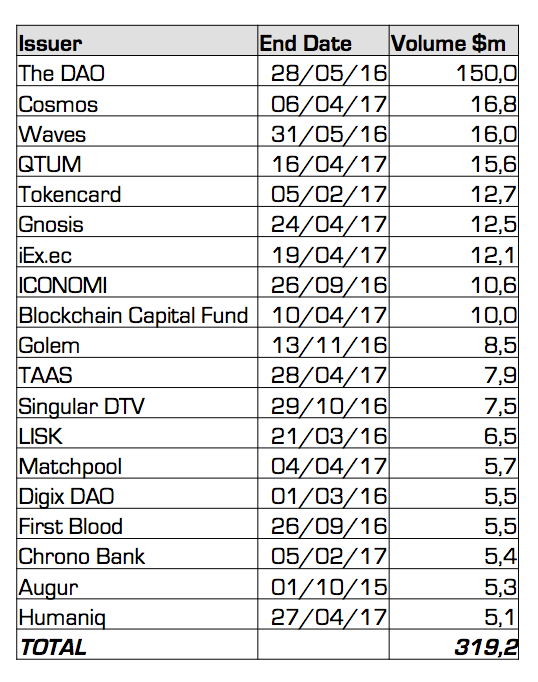 However, if we look at the monthly distribution based on these ICOs the increased amounts ICOs are able to raise: 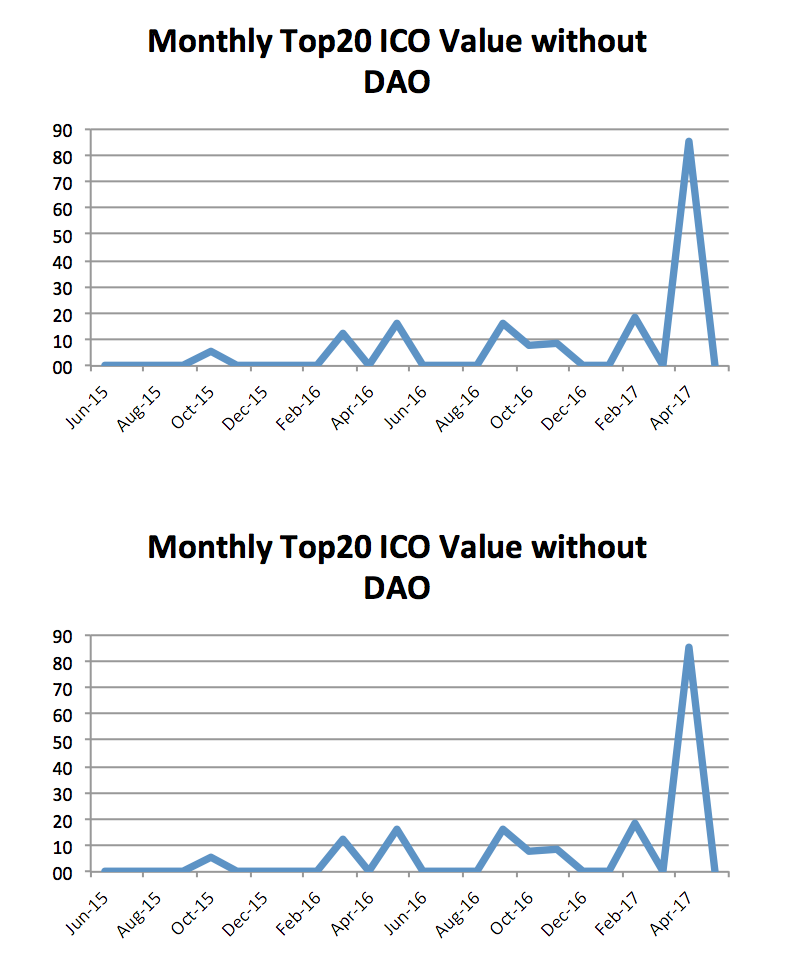 In turn this is in part due to the price explosions in Bitcoin and, even more so, Ether as can be seen when comparing the above charts with those for the two cryptocurrencies for the same period: 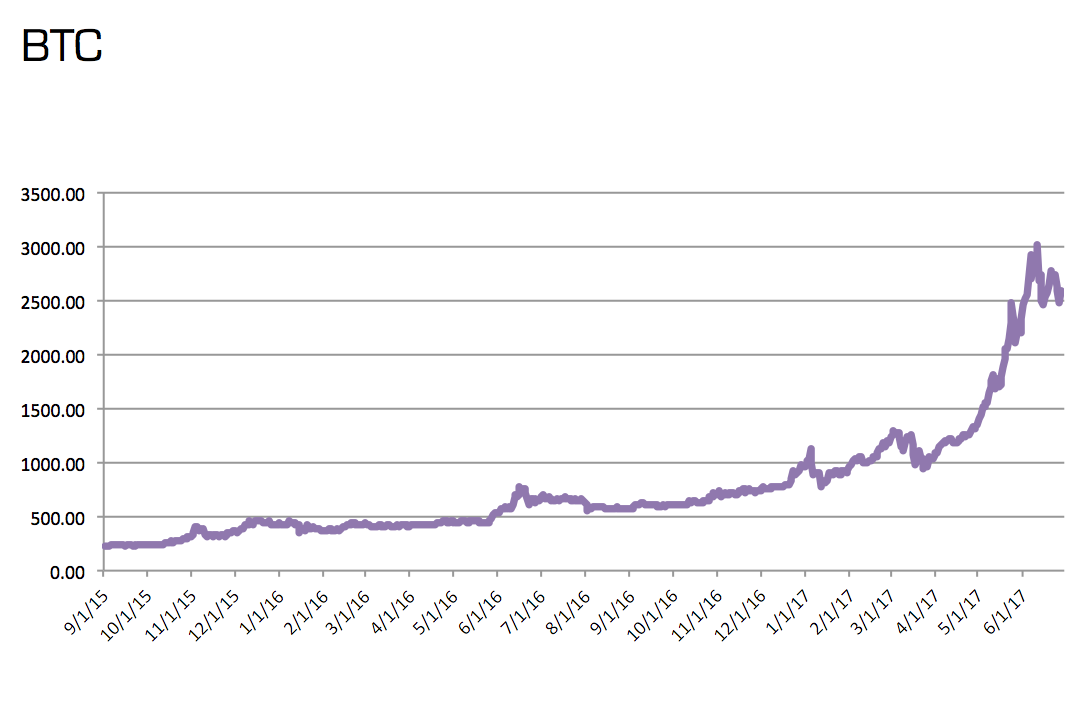 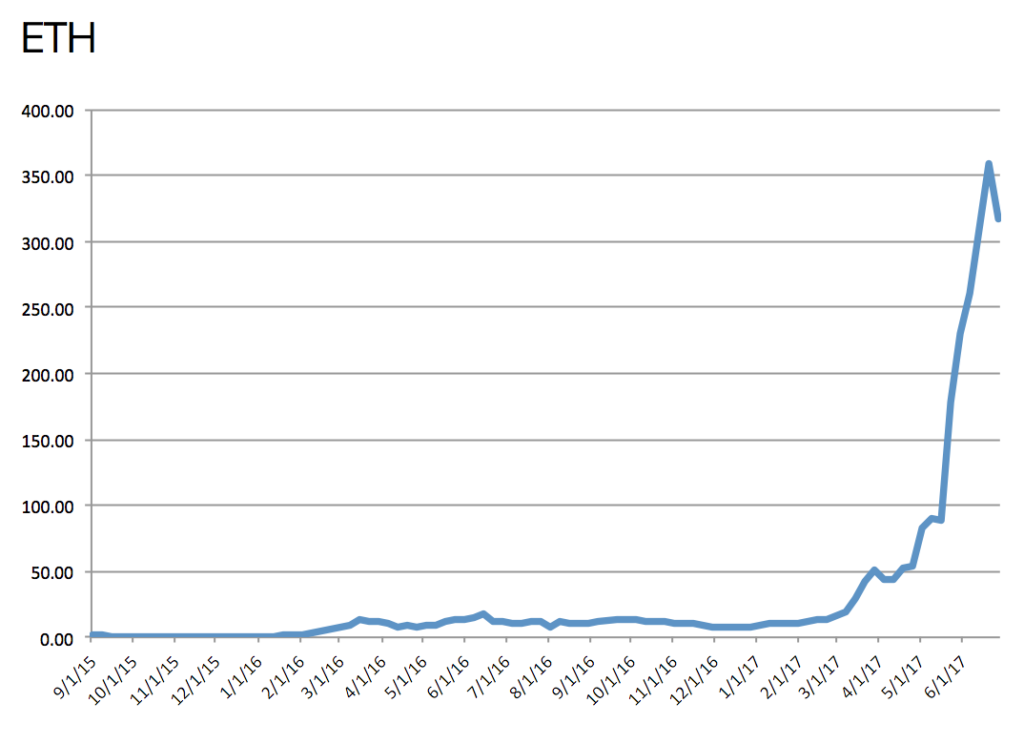 Hence the number and value of ICOs is likely to continue to increase or at least produce record numbers in a similar bracket. For example, a number of recent or still on-going ICOs produces equally marvelling results: Mysterium Network raised more than $14m; Aragon even got as far as close to $25m;

ABTCoin is halfway through its ICO and stands at $11.4m; Polybius, which runs until 5 July has already raised almost $25m; and OpenANX, which has started its one-month long ICO as recent as a week ago already collected $17m in funds according to the data of Smith + Crown. And then there are the ICOs of Status $95m and the record breaking ICO of Bancor Protocol for $153m, which is another dimension all together.

The not so bitter reality of token returns

Getting back through to the returns that can be expected from ICOs: While the examples of Augur and Golem are two extraordinary examples that have been trading since last year (with their prices exploding though only as recent as April), generally a pattern can be drawn. Take the ICO of Humaniq, a company I work with:

Charts and Data from coinmarketcap.com/Highcharts.com

In the six weeks its token HMQ has been trading the value in both Dollar and Bitcoin terms has more than doubled, with the market cap up 600% probably at least in part due to the price spike by BTC with the latter climbing thanks to increased adoption, in particular in unstable economies like Venezuela but also through the acceptance of steady jurisdictions like Japan but also because of the increased number of ICOs.

Like Bitcoin but certainly with a significantly higher leverage all these tokens come with the risk of substantial setbacks all the way down to an entire loss of value. As such, it will be interesting to see how regulators will respond once we see a series of token collapses and previous scandals from the world of Blockchain and Cryptocurrencies may be an indicator towards what to expect. In any case, the regulatory climate is likely to tighten. Until then, fasten your seatbelts, you might be in for a rough ride.