The Fix: How Bankers Lied, Cheated and Colluded to Rig the World's Most Important Number 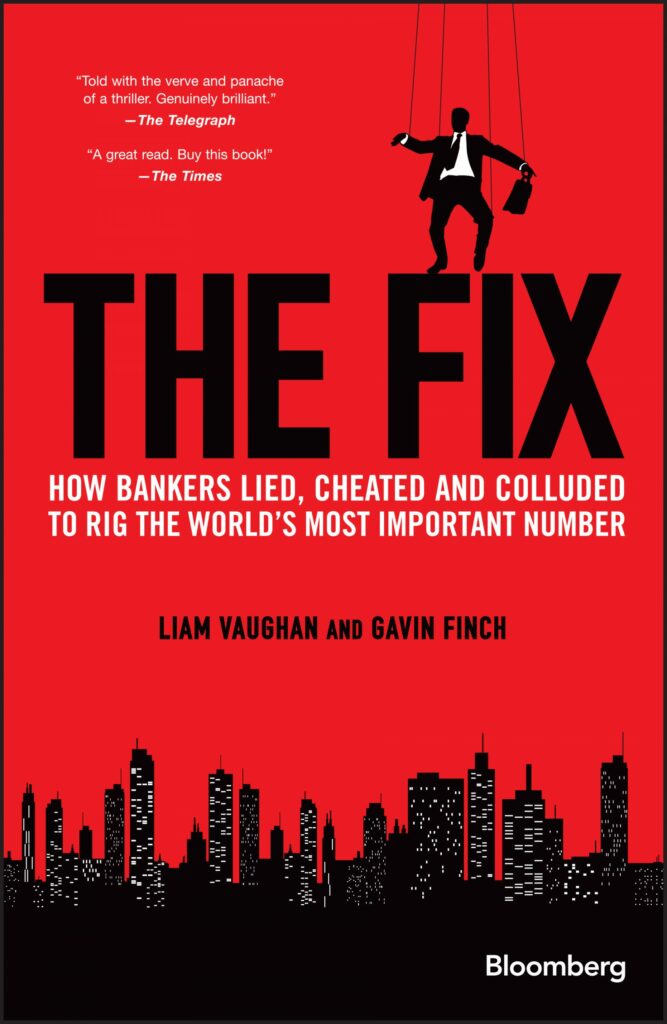 It’s one of the biggest scandals in the history of financial markets and its repercussions are still being felt in the industry as individuals and financial institutions being under investigation.

Liam Vaughan and Gavin Finch present an account of the story in their new book “The Fix: How Bankers Lied, Cheated and Colluded to Rig the World’s Most Important Number“. The book takes us from the invention of the benchmark in the 1960s to the pinnacle of its manipulation that had cost US municipalities alone at least $6 billion.

I met with Liam on a grey and rainy day in a coffee shop just outside of the boundaries of the City of London to talk about his new book, how to tell a compelling story about rate rigging and why financial scandals are not a thing of the past.

While the book takes us through the story of LIBOR from the invention of the benchmark in the late sixties to the discovery of its rigging and some of the people and institutions involved (for instance, the chapter on the Barclays settlement and the downfall of it s CEO, Bob Diamond), it focuses in large parts on Tom Hayes, the former UBS and Citigroup trader, and to a lesser extent the role of the regulators. When you have to reduce a story such as the LIBOR scandal that could probably fill an entire bookshelf to about 200 pages you have to make choices on what to concentrate on and Hayes is the obvious one: based on his own accounts from 80 hours of interviews with the authorities prior to his trial, it looked like many took part in the rigging, but he had simply taken the whole thing further than anyone else. The book presents him as a talented, but socially awkward outsider that rises through the ranks of different financial institutions. It shows how he influenced people responsible for submitting to the rate setting process and by doing so manipulating LIBOR in a way that suited his trading positions, helping him make large profits for his employers, and eventually how he got found out and convicted to spend 11 years in prison.

Benchmark rigging as such may sound quite dry and might not have warranted a book ten years ago. The LIBOR scandal, however, gave the world an intimate insight to a system of commissions and kickbacks for deal flow that made many bankers a lot of money, which for many may confirm the image they have of the industry and its people. The Fix tells us how brokers spent thousands to entertain traders at prices restaurants and expensive events or even paying for trips of contacts like Hayes who took his future wife to Thailand at the expense of another financial institution. However, Liam stresses that most of the people he talked to for their book are not just kind of cliché dodgy banker stereotypes, but real people driven by the same kind of emotions as anyone, same pressures, needs and desires like everyone else. This certainly makes the book interesting for a wider audience and it also shows, according to Liam,  the problem of the system: As long as people are incentivised to try to find where the line is and skirt on the right side of it, to find loopholes and avenues that haven’t been exploited, the risk of abuse is always there.

While he is under the impression that the general culture is improving because of the fines that really hurt, so that compliance is no longer merely an afterthought, ultimately the people at the centre of the financial industry are still the main men who make all the money and their bosses are also more often than not from the same side of the business showing the same sort of aggressiveness. He made it clear that he does not want to judge people, but is merely attempting to explain what happened with LIBOR and how this may be repeated in not the same, but similar. After all, Liam says, most of those guys are nice people with families that make mistakes. He continues by explaining that part of the problem is though that they are in an environment where nobody really asks questions and they are surrounded by other people that have a similar kind of mindset, so the focus is very much on performance and P&L, and it’s easy to explain why people don’t take a step back and consider their actions as they probably should.

The other interesting aspect is the role of the regulators in the LIBOR scandal: the book explains the efforts of the CFTC that led to successful enforcement actions against individuals and banks, but it also shows the short fallings of others. It describes the incredible passivity of authorities like the FSA and the Bank of England, the implicit criticism on regulators for not having done enough before and after the financial crisis of 2007/2008, and the chance LIBOR represented for regulators under pressure. Which, in turn, makes it all the more interesting how the six interdealer brokers accused of colluding with Hayes that were tried and acquitted last year, but that’s a different story.

The Fix sometimes reads like a thriller (the introduction is a scene in a hotel bar that could also be from a Le Carré novel) and Liam confirms it’s no accident.

He says that it’s deliberately written to be exciting, to be engaging, but he thinks they successfully avoided the temptation to present people in certain ways to suit the story.

So when I ask him about the movie rights, he tells me with a laugh that while they didn’t have it in mind when they wrote the book, he believes that the figure of Hayes certainly was a compelling enough character in order to cinematise LIBOR for the big screen. Who knows, I hear the guys at HBO are always looking for good material…

The Fix is published by Wiley where you can find it together with additional information here: http://eu.wiley.com/TheFix and you can buy it at Amazon.